From Encyclopedia of Sindhi
Jump to: navigation, search 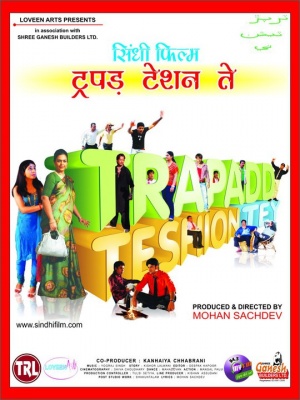 “Trapadd Teshion Tey” is an out & out comedy film, a story about a leading businesswoman.

“Trapadd Teshion Tey” is an out & out comedy film, a story about a leading businesswoman Shanti Bajaj. Shanti is very arrogant in nature. She thinks that money is everything in life. Dharamchand & Karamchand are business rivals of Shanti and always get defeat from her. So they plan to remove her from their path and appoint a contract killer Jaicky. Shanti has a son Thada, (who want to become an actor) & daughter Lata, (who married to Chetan against her mothers wish). Chetan is an insurance agent and Shanti always dominate him for his poorness and hurts his self-respect. Lata always try for fill the gap between her mother and her husband Chetan.

A failure Producer Poptani, meets Thada and befools him, pretending a big producer and assuring him of making bollywood superstar, for that he demand twenty lacs to make new film. Thada demands that money from his mother, but shanti refuses to part with money. Thada leaves the home angrily. Thada and Chetan are frustrated from Shanti, and want to kill her. So they hire a tapori and kadka gunda Jhaman.

Now Jhaman and his punter plan and execute their plan to kill Shanti and on other side Jaicky is also doing the same thing on behalf of Dharmu & Karmu. But every time plans fail and do affect on other side. At the end very funny situations are created, and Dhamaal begins with curtain raising of the plans. Shanti feels her mistake and the whole family lives happily.